We The Young organised a day-long event ‘WhatsUpZindagi’ in November 2019 at Indian Institute of Delhi (IIT). It was a day packed with sessions and workshops on various topics related to mental health awareness. We conducted a session on friendship breakups, titled Dost, Dost Na Raha. We were accompanied by an art therapist, Sharmeen Khurana, who did with us an interesting and cathartic activity at the end of the session. 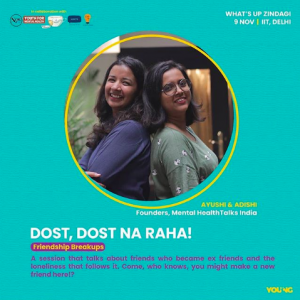 The session was titled ‘Dost, Dost Na Raha’, focusing on friendship breakups. Friendship breakups being a topic rarely discussed, our group of 10-12 participants, had a heartwarming experience of their past hurts being validated. We talked about our experiences and discussed how painful it is be separated from a friend, and how much invalidation and invisibility an issue like that accompanies with it. 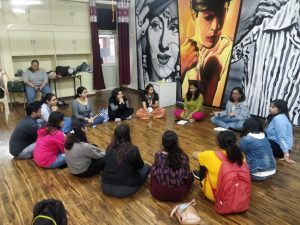 One of the participants was also moved to tears because of how heartwarming it was for her to talk about her experience.

To end the event, Sharmeen Khurana facilitated an activity where we wrote short letters to our ‘ex-friends’ about everything that remained unresolved and unsaid–all the things we could not say–on origami sheets. We ended the session by making an aeroplane with those sheets and setting them off in the air, in a bid to let go all that was holding us down.

#JustStay: A Pop-up at JNU for World Mental Health Day on Suicide Prevention