When I was in primary school, there was a poster in my class that said, “With a happy mind comes a happy life” and today, it makes so much sense to me.

When I was younger, I would stand in the front of the mirror, staring at how amazing I thought I looked, completely unbothered by what anyone said. A lot of us were like that, weren’t we?

So why did it suddenly become not okay to love ourselves the way we look?

I always had an interest in co-curricular activities but never participated in any of them. Because I was always concerned about how I looked, whether or not I was socially acceptable. We are in a generation where “How to get thin” videos get more hits than “How to stay healthy”. The problem was never our body but the ideas of a ‘perfect’ and the way women’s bodies are objectified in the media. It is also safe to say that teens usually define their self-worth by their appearance.

People today aren’t only suffering because of the unattainable ways by which beauty is defined but because THEY are being defined by beauty. So rather than working to make sure more women’s bodies are viewed as valuable, we are focused on making sure women are valued as more than bodies.

According to Calogero, self-objectification explains the psychological process by which women internalise people’s objectification of their bodies, resulting in them constantly criticising their own bodies.

In school, I was addressed as ‘ugly’. Being surrounded by a bunch of judgmental people, I started looking at myself the way they told me to. In this image-obsessed culture, I was convinced that I wasn’t ‘good enough’ and by good enough, I mean thin enough.

In college, I participated in a cultural fest where I met a girl in my department and as we walked, she told me, “I’ll be late for my dance class today”. Not that I had anything to do with her dancing, but the fact that she was so excited to dance even though she was a lot chubbier than I was, had a deep impact on me. She continued telling me that she was looking forward to all her performances. Performing in front of a live audience has always topped my bucket list since as long as I remember but I could never take an initiative because of my negative body image.

But did I overcome it? Yes, I did. I write this because I understand how it feels to be insecure about the way you look and how it feels. Going back to when I met that girl, I spent the rest of the day thinking to myself, “Why can’t I do it if she can”.

It’s then that I realised that she was so much happier than I was because she didn’t care about how she ‘looked’ while performing, the only thing that mattered to her was her PERFORMANCE. That’s when I thought about how my negative body image had robbed me of all the opportunities I had during school.

Initially, when we started with the fest preparations, I knew I had to stand out and showcase my talent. However, it wasn’t as smooth and easy as it looked. There were times I had to speak in front of 300 people with my voice hardly audible to people. This drained my self-confidence at times, but there were also moments that brought me joy. I had promised to work hard. All my seniors always praised my work and it made my heart so full that there was no room for how I looked.

I used to practice appreciating myself every time I got a chance to. Even if it was as small as telling myself, “I feel cute today!”. You shouldn’t have to ‘believe’ that you are beautiful but you should KNOW that you are. My goal is to be my younger self again, being able to admire my body regardless of its shape or size. That’s the kind of love our body deserves. 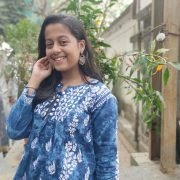 Swadha Prasad is a 12th standard student, studying in Mithibai college. She has been interested in Psychology for 3 years now. Guy Winch's books interest her. She writes to provide hope to people who are struggling.

Beautiful or Not! Who Decides That?

This Is What Living With Bipolar Disorder Looks Like

I Have Learnt to Appreciate my Body

Beautiful or Not! Who Decides That?

A Letter To My Dysfunctional Family

My Journey of Powering Through Self-Doubt

How Dance Saved My Life